July 6, 2017 was a year since I started changing how and what I ate.  I didn’t know for sure what would happen physically, but I knew I needed to gain control of myself in a way that could be for the rest of my life. I had no intention of blogging about it, as a matter of fact, I didn’t even tell anyone initially; I just started making small changes after the first three or four days of detoxing. Boy, that was hard.

One year and 57 lbs later (that’s a good rate I think for myself; just over 1 lb per week average) I feel I have some control but it’s still about daily choices . I’m sure the loss will be slower in the following weeks and should stop completely in about 6 to 8 months, simply because I would have to eat less than 1000 calories per day to keep losing.  I don’t plan to do that; the goal is to be healthy, not sick.

I only started to blog about my eating changes after getting numerous emails and texts about what I was doing.  The weight loss was being noticed. I was mainly focused on my health. I didn’t necessarily want to put it all out there on the internet but I wanted to be an encouragement to anyone who needed it. It is hard work people! Much encouragement is needed … from anywhere.  Blogging can put one in a vulnerable place but I’m willing to risk it if there are people out there who will read the blog and can get another boost to keep going. I know when I started it gave me great hope to see others who were eating healthier and on the same path and struggle as I was.

So, a whole year has passed.  I have never watched my health habits for such a long stretch but like I said in an earlier post, my motivation this time was to BE HEALTHY,  the weight loss was a nice benefit. You probably noticed that I haven’t put any photos of myself on the blog yet.  I have several photos but I mostly posted headshots. 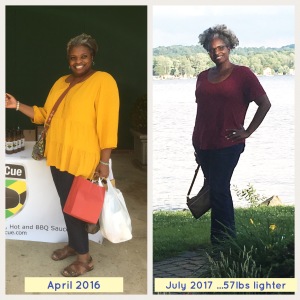 The not so funny thing is, before losing weight, I really didn’t feel fat, or looked all that fat to myself.  I had a million excuses in my pocket, ready to use any of them when confronted by my own self about my size. They worked for the most part. Lying to oneself is as bad, if not worse than, lying to others… just saying.

Anyway, I can’t say I’ve had setbacks over the past year because my new way of thinking is not about ‘falling off the wagon, and ‘getting back on my diet’…it’s about making choices…and we can all do that…everyday.  I just had to make way more good choices than not so good choices in what I consumed. So, if I had a meal that was a not so good choice, then I made sure to follow it up very closely with very good choices for the next few days. Simple enough.

You notice that I said, not so good choices versus bad choices. What exactly is a bad choice??  In my world, there are none.

I’m not a regimented robot, I’m a human being, and that includes moments when I had foods that were not so good for my body (chocolate cake, pizza, chicken wings) but they were good for my mind and spirit at the time. Also, life offers different occasions where you’ll enjoy some tasty foods. A little bit does not derail you, and it keeps from feeling deprived I’ve found.
Side note: If discipline is and issue and you know you won’t quit till the entire pizza or cake is devoured then you might need to come up with a different strategy for yourself before you take the first bite.

That’s all for now. I hope the bearing of my struggles has encouraged and challenged you to keep a healthy lifestyle as your goal.

P.S. This blog is to encourage myself too. 😏😎

2 thoughts on “The Not-So-Funny Thing About Fat”